When I graduated from the first Django Girls workshop at EuroPython last summer, I knew that I simply had to bring the workshop to my current hometown of Brno, Czech Republic. It took some time, but I’m happy to report that it was worth the wait! 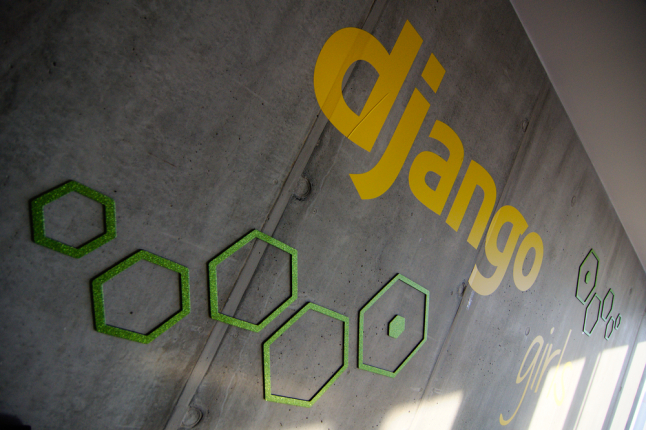 It takes a village…

Organizing the workshop was surprisingly pleasant and smooth, firstly thanks to the incredible infrastructure set in place by the original organizers, Ola and Ola. Between the tutorial, organizer manual, and plenty of shared resources, anyone can start an event anywhere.

That being said, having Lenka Moutelíková (another DG@EP graduate) as a co-organizer who also lives in the same city definitely helped the organization efforts, since we were able to sync locally and pool our mental resources, each with their own expertise.

To complete our trinity, we enlisted the help of one of my Red Hat colleagues Petr Viktorin, who (aside from being an awesome Python developer) is a core PyLadies coach and a co-organizer for Pyvo, a series of Python meetups in Brno, Prague, and Ostrava.

… And sometimes, the neighboring villages!

We decided to partner up with DevConf.cz, one of the biggest open source contributor conferences in Czech Republic. With over 1,000 attendees at its 4th year running, the conference has something for everyone (even beginners!).

In addition to DevConf, we were also fortunate to be sponsored by both the local Red Hat office and ElasticSearch, whose support enabled us to have a great space for the workshop, food, travel aid, swag, and much needed cupcakes.

Did I mention cupcakes?

Yes, this cupcake made it to Krakow without being eaten by Baptiste, our meta-coach. That takes determination!

Our workshop had 27 participants (out of over 160 applicants!) and 11 coaches (including meta-coach, unassigned to a group). Each 3-person group completed the installation prerequisites remotely with their coaches before the workshop day.

On the morning of the workshop we (as in the organizers) turned up at the venue at 7:00am, as the breakfast delivery was scheduled to arrive at 7:30am. The things we’d do for breakfast…!

Ok, so some breakfasts are worth it…

At 9:00am we welcomed our participants (who actually started arriving around 7:40am!), and kicked off the workshop. By the end of the day, almost everyone finished the tutorial, and even the ones who didn’t made it to a very advanced stage and still felt accomplished (which is kinda the point, yeah?).

The girls happily hacking away at the #django apps! Go go #djangogirls :-) pic.twitter.com/j92saOY7pV

We decided to include two guest presentations that we felt enriched the experience and introduced the participants to different voices of women in tech.

The first presentation was from one of our coaches Dori Czapari (another GD@EP graduate, and organizer of Django Girls Budapest) who recently started her first job as a Python developer! Dori shared how participating in Django Girls workshop helped her gain that extra confidence boost that she needed to pursue her career in programming.

The second presentation was from Denise Dumas, who currently serves as the Vice President of OS Platform at Red Hat. Denise is one badass lady, having started as a kernel hacker some decades ago and now runs a 500-person engineering organization within Red Hat.

Denise walked our participants through the different roles that one can pursue in IT beyond classic programming, and introduced the participants to the concept of open source projects, where starting out is as easy as creating a GitHub account.

At the end of the day, after more than 10 hours (!!!) of coding, we wrapped up headed to one of the local pubs to toast the day’s success. I was happy for the opportunity to talk to our graduates and hear their feedback.

We also had one last surprise for them, when Pavla from Czechitas basically stood up on a bench and gave an informal introduction to this amazing project. Czechitas is a local group that organizes various courses and meetups about technology for women.

With previous collaborations with Rails Girls, Data Girls, and PyLadies, it’s only natural that we would work together to increase our reach to women in the region. Scroll to the bottom of this post if you’re impatient, good things are coming up ahead!

Oh yeah, one last surprise guest: give it up for Pavla from @czechitas! Thank you for your support :-) #djangogirls pic.twitter.com/TMhu4ZNW3I

Seeing that we had a lot of leftover swag and cupcakes, we decided on a whim to set up shop and have a table alongside Fedora, OpenStack, and Red Hat. The booth was a great way to establish our presence at the conference, and people came up to us to ask questions and find out more information about our program.

It also meant that our graduates had a “home base” that they can always come back to if they feel lost (and let’s face it, being a newcomer at a developer conference can be scary!), so it helped them feel more comfortable and confident of their place in the event.

Another last-minute effort was to submit a lightning talk proposal on the morning of the first day (second-highest number of votes FTW!), and later that day I got to introduce the program to ~20 conference attendees and call out for help with future events and our hackfest, which was scheduled for the last day of the conference.

Great lightning talk on @djangogirls by @thatdocslady kicks off last session of the day at #DevConfCZ. pic.twitter.com/WG7Bvhg63U

The hackfest itself was pretty relaxed, with some interesting brainstorming sessions and a lovely surprise in the form of a woman who came in asking for help with the tutorial that she’s started working on by herself! Luckily, a Red Hat developer came to the hackfest to learn how to coach, so we paired them up and they finished about 2/3 of the tutorial in 2.5 hours!

One red hatter is learning how to coach while working on the #djangogirls tutorial! #DevConfCZ #redhat pic.twitter.com/Z7hVrRkMOP

To be continued… Sooner than you think!

All in all, the workshop was a success! I’d like to shout out a massive thanks to every person who helped out, especially the coaches who traveled from all around Czech Republic, Poland, and Hungary.

We also had tons of support from our employers, local communities, and other outreach programs in the city, our participants were bright and motivated, and us organizers even managed to have a few minutes to sit down and observe the buzzing activity around us, and smile.

And on that note, I’d like to announce the very first Django Girls / Czechitas meetup @ Brněnské Pyvo!

On February 26th, 2015, Czechitas and Django Girls will join forces with Brněnské Pyvo for a special meetup with talks about documentation, Django Girls, and Czechitas, as well as plenty of food and drinks.

Details, directions, and other tidbits can be found in the Lanyard page for the meetup. We’re hoping to see many of our graduates there, and anyone else who is interested in Python, Django, docs, or awesome communities.

Thank you Django Girls, you rock my world. And apparently, this Red Hatter’s world too: